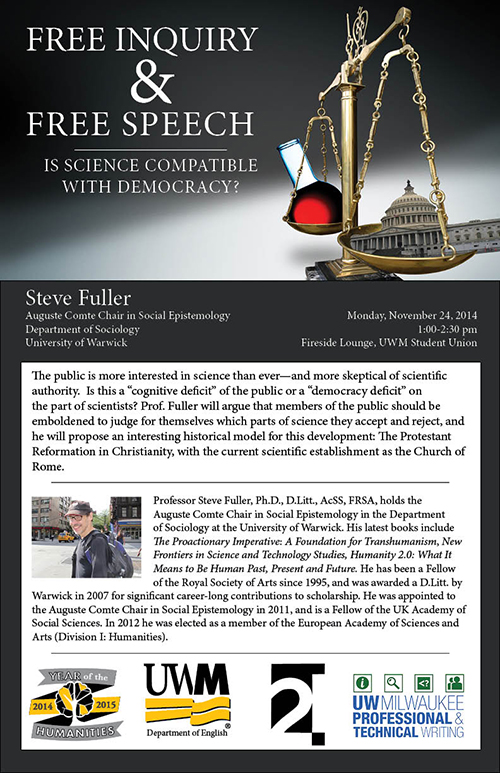 Precis:The public is more interested in science than ever—and more skeptical of scientific authority. Is this a “cognitive deficit” of the public or a “democracy deficit” on the part of scientists? Prof. Fuller will argue that members of the public should be emboldened to judge for themselves which parts of science they accept and reject, and he will propose an interesting historical model for this development: The Protestant Reformation in Christianity, with the current scientific establishment as the Church of Rome.

Bio: Professor Steve Fuller, Ph.D., D.Litt., AcSS, FRSA, holds the Auguste Comte Chair in Social Epistemology in the Department of Sociology at the University of Warwick. His latest books include The Proactionary Imperative: A Foundation for Transhumanism, New Frontiers in Science and Technology Studies, Humanity 2.0: What It Means to Be Human Past, Present and Future. He has been a Fellow of the Royal Society of Arts since 1995, and was awarded a D.Litt. by Warwick in 2007 for significant career-long contributions to scholarship. He was appointed to the Auguste Comte Chair in Social Epistemology in 2011, and is a Fellow of the UK Academy of Social Sciences. In 2012 he was elected as a member of the European Academy of Sciences and Arts (Division I: Humanities).