Welcome, one and all, to this edition of Object-Oriented Quibbles (OOQs). OOQs are my way of exploring the rich scholarship of Object-Oriented Ontologies (OOO), but with a slightly critical eye. My recurrent caveat: I love OOO—or at least parts of OOO and the broader new materialist scholarly tradition in which it participates. OOQs are my way of refining and improving my own developing OOO-esque theories. If this sort of thing appeals to you, you might enjoy my first three OOQs: 1) The Cult of the Z-Axis, 2) The Carpentry of Discourse, and 3) Wherein A Meta-Quibble Becomes a Quibble About Metaphysics.

But without further ado, today’s episode: Time is Information and Why You Should Care. 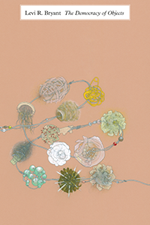 Today’s OOQ focuses on what is probably my favorite work to date in the OOO tradition: Levi Bryant’s The Democracy of Objects. Levi Bryant, as many of you know, is a professor of philosophy at Collin College. More importantly, however, he’s largely attributed with coining the term, “Object-Oriented Ontology,” which makes his work of special relevance to OOO broadly and my OOQs specifically. The Democracy of Objects is a theoretical tour de force, exploring the failed history of Western epistemology alongside the works of Graham Harmon, Aristotle, Lacan, Latour, and Deleuze, among others. The book offers a cogent and coherent elucidation of what Bryant dubs “flat ontology”—his version of OOO. “Flatness” here refers to a presupposed lack of reducibility. In Bryant’s OOO, no individual object and be reduced to or explained by any other object. This, of course, provides an obvious exodus from epistemology, in that epistemology requires an explanation by a subject (and often is enacted through a reduction of the object to that explanation). The more difficult (for postmodernist) corollary of flat ontology is the rejection of hegemonies. Bryant argues that it is equally inappropriate to reduce an object to preexisting socio-structural theories such as classisms, paternalisms, colonialisms, sexisms, etc. In short, the argument is that these constructs provide an a priori (and anthropocentric) answer to all inquiry and thus forecloses on many possible explanations.

While flat ontology and onticology provide a wide variety of directions for interrogation, this is a quibble, so I will turn now to my primary critique of The Democracy of Objects, and this begins with my argument that time is information.

As Bryant describes it on page 166, Information,

“Endo-structure” is Bryant’s term for the interior and essential features of an object, those features that would exist and be manifest regardless of any relations that object has with any other object. Thus under Bryant’s model, the recognition of information is an event wherein one object perturbs its environment and a second object with an appropriate endo-structure receives this annoying stimuli and due to the accidents of the second object’s endo-structure the perturbation is interpreted as information. To elucidate this more clearly, Bryant relates a cynical narrative of how he interacts with his cat, pointing out that where he interprets the cats nuzzles as affection; it’s very likely merely a desire for warmth. The cat has perturbed (nuzzled) Bryant and his human endo-structure has interpreted that as information (affection) in a way that has nothing to do with the cat.

For Bryant, information exists solely in the acquisition of a perturbation and the folding of that perturbation into the endo-structure of the object/system that is perturbed. As he further clarifies,

Why is Time Information?

Before time, a quick detour in space: One of the four essential theses of Bryant’s flat ontology is his assertion that the world does not exist. Bryant’s elucidation of this thesis focuses on his argument that flat ontology is comprised of collectives and assemblages, not wholes and parts. Just because we humans have traditionally defined the world or the universe as a whole which subsumes the parts (objects) we investigate does not mean that would be an accurate or desirable mode of ontological gerrymandering. As Bryant elucidates,

One way to read Bryant’s rejection of the world might be to understand “the world” as information. That is, our human or societal endo-structure is built in such a way that we coalesce the manifold perturbations of our experience into a holistic narrative and map that narrative onto a presupposed super-object—the world. Indeed, the holistic super-object world is probably not one that exists in the information milieu of other autopoietic systems such as cats or birds or, probably, even chimpanzees. (Possible exception: space traveling chimps, the poor bastards.) Indeed, Bryant makes the same argument about the temporality of galaxies, climates, and ecosystems. Time—for these objects—transcends the human informational milieu, which is no doubt one reason we have so much trouble passing meaningful climate change legislation. (But that is an argument for another place.)

Indeed, Bryant specifically recognizes that human/social autopoietic systems construe perturbations within an information milieu that suffers from very particular (and likely idiosyncratic) notions of space-time. These constructs, he argues, we must overcome.

At the level of object-oriented and onticological mereology, ,we cannot work form the premise that location in time and space is sufficient to individuate an object, or that objects exist only at a particular scales such as the mid-range objects that tend to populate the world of our daily existence. Rather, entities exist at a range of different scales, form the unimaginably small to the unimaginably large, each characterized by their own duration and spatiality. Here a tremendous amount of work remains to be done in thinking these spatial and temporal structures. (Byrant, p. 241).

What makes the unimaginably small unimaginable? No doubt the fact that the perturbations they produce are unrecognized by our human/society information milieu. Although, Bryant does not explicitly cast this argument for novel approaches to space-time in terms of information, his use of the term “unimaginable” is suggestive.

Certainly, we have all had different experiences of time. The watched pot, here, is instructive. If we more actively perturb or information milieu (with some other activity), our experience of the time it take for a pot to boil is quite different than if we do nothing but watch for the impending perturbations of steam and squeal. And, again, what of non-humans? What is time for a dog or a rock? If our ontology is to be flat, it cannot be grounded in human conceptions of time.

Of course, this argument was long ago provided by Immanuel Kant in his articulation of the synthetic a priori. Indeed, Kant’s suggestion could be folded quite nicely into OOO if we assume that the synthetic a priori are human endo-structures. In this case, time would not be information any longer, but rather that essential part of human cognition which configures how we construe information as derived from perturbations. (Certainly, The Democracy of Objects addresses Kant’s a prioris at great length and does great work deconstructing substance, for example. However, this quality analysis did not extend to time.)

Why Should We Care?

This is not just some esoteric point about the nature of time. OK. It is, indeed, a really, really esoteric point, but it’s not just an esoteric point. There are actual ramifications for OOO. Much of The Democracy of Objects articulates its theory based on references to time and the temporal experiences of objects. Chief among these is Byrant’s rejection of the Latour/Whitehead objects as instantaneous momentary articulations thesis.

Why, then, if objects must reproduce themselves from moment to moment, do I not follow Whitehead in arguing that being, at its most basic level, is composed of “actual occasions” and that objects are but “societies of the actual occasions”? Whitehead’s actual occasions are instantaneous events that cease to exit the very moment they come into existence…. However, to treat actual occasions or instantaneous time-slices as the atoms or true units of being is to confuse the being of objects with their parts. An object is not its parts, elements, or the events that take place within it—though all of these are indeed indispensable—but is rather an organization or structure that persists across time. (Bryant pp. 233-234)

While Bryant’s point about the whole/part issue is well taken, I must pause at his argument that an object is an “organization or structure that persists across time.” Whose time? I fail to see how this argument amounts to much more than, humans recognize a similarity between two actual occasions and thus by virtue of their temporal endo-structure construe a persistence between the two instantaneous time-slices. And for that matter, would not the perception of similarity itself be information? If an autopoietic system is constantly self-remaking, who is it that is recognizing the persistence/ similarity of the structure/organization?

I’m a theoretical pragmatist (both in the philosophical and colloquial sense of the term, but here I mean the colloquial). For me the utility of a theory is in many ways based on whether or not it offers a better/ more compelling account of the objects of study. Within new materialism, there are many options available. OOO is one of the primary among post-ANT/associology. However, I am a bit concerned regarding the comparative utility of OOO as long as it fails to overcome the problem of time as information. I’m still confident that OOO is a highly valuable tool, but some work may still need to be done.

1 thought on “Object-Oriented Quibbles #4: Time is Information and Why You Should Care”