Note: If you haven’t been following along with these Object-Oriented Qubbles (OOQs) and don’t know what I’m doing here, then you might which to see OOQ #1 and/or OOQ #2.

OK, so the entire point of these OOQs was to provide me with an opportunity to further explore my understanding of Object-Oriented Ontologies (OOO) while improving my vision of OOO through friendly critical quibbling. Today’s post begins as something else. I’ll be quibbling about someone else’s quibble. That’s right I’m meta-quibbling. [For the love of god, make it stop! –screams the largely beaten down tech writer in me.] So without further ado, I turn my attention to Harold Morowitz’s recent “The Plural of ‘Ontology’ is ‘Confusion,’ published in Complexity 17.6. Although many of my readers can no doubt see where I’m going with this, it’s worth noting that Morowitz’s primary target is not OOO or multiple ontologies, but rather the use of the word ontologies in computer and information sciences. Quoting Tom Gruber, Morowitz’s presents this definition to which he objects:

An ontology is a description (like a formal specification of a program) of the concepts and relationships that can formally exist for an agent or community of agents. The definition is consistent with the use of ontology as a set of concept definitions, but more general. And it is a different sense of the word than its use in philosophy.’’ Thus, one can have ontologies of linguistics, genomics, cultural heritage, and almost any domain for which data bases exist. (pp. 5-6)

The word ontology has an extended usage in Philosophy and in this context it is defined in ‘‘The Oxford English Dictionary’’ as ‘‘that branch of metaphysics concerned with the nature or essence of being or existence,’’ with references going back to 1663. Thus, when I was handed my diploma many years ago, under the teaching of Brand Blanshard I had accepted that definition with the further refinement from a 1903 article by F.C.S. Schiller (Humanism i.9) noting that ‘‘The effect of what Kant called the Copernican revolution in philosophy is that ontology, the theory of Reality, comes to be conditioned by epistemology, the theory of knowledge.’’ Thus, metaphysics was presented as a combination of ontology and epistemology, what we know? and how we know it? When I arrived at graduate school and the mentorship of physicist philosopher Henry Margenau these ideas were refined, ‘‘We hold with Kant that epistemology must precede ontology and that epistemology denotes the methodology of the cognitive process. The methodology of science involves deliverances of sense as well as rules of correspondence, constructs and principles regulating constructs’’ [1]. Note the recurring importance of Kant, who really first codified the epistemology of Newtonian physics (Kritik der reinen Vernunft [2]) in 1781. Later authors have formed a neo-Kantian tradition altering the a priori features of Kantian epistemology to fit the changing physics. That tradition still persists (p. 5) 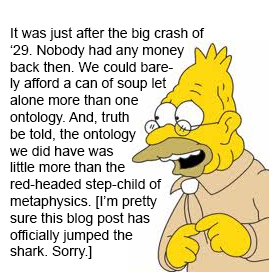 While I don’t particularly have much of an opinion on the use of “ontology” or “ontologies” in information sciences, I do think it’s pretty damn ridiculous to presume that computer and/or information sciences give a crap about what philosophers think of their use of the terms. Furthermore, I always get irritated with some pedantic traditionalist purports to suggest despite overwhelming evidence to the contrary that words, their definitions, their use, or their spellings can or should be limited to what was taught while the aforementioned pedant was in grammar [graduate, in this case] school. That kind of normativity serves no purpose. I’m not going to rehearse the argument here. For two wonderfully engaging versions, try the Smithsonian’s recent “Most of What you Think You Know about Grammar is Wrong,” or Stephen Fry’s “Don’t Mind Your Language” set wonderfully in kinetic typography here.

Of course, given that this is an OOQ and not just a ranting about linguistic normativity, let’s get to the point. Despite my snarky mockery of Horowitz’s article, much in philosophy (including much of OOO) is beholden to something like the traditional sub-disciplinary gerrymandering wherein “metaphysics [is] presented as a combination of ontology and epistemology” (p. 5). Now, as anyone who’s read any OOO knows, the innovative move of OOO is to remove epistemology from the equation. Levi Bryant for example offers a wonderful excoriation of epistemology inquiry in his identification of the epistemic fallacy. As he describes it,

Graham Harmon, Andrew Pickering, Annmarie Mol, Ian Bogost, and many others all offer similar critiques of epistemology and in so doing argue (convincingly) that most of the history of Western philosophy has been plagued by an epistemological focus that reduces inquiry into reality questions about access to reality.

My quibble and key point: by maintaining a vision of ontology as subsidiary to metaphysics, OOO fails to escape the problem of access. Harman’s distinction between real and sensual objects, Bryant’s bifurcation between endo- and exo-qualities all presuppose (even when they claim not to presuppose) some sort of reference object (although a nonhuman reference object) on which sense impressions/ perturbations can land and be registered as qualities/information/sensual inputs. I would argue that these distinctions (endo/exo//real/sensual) are the manifestations of the traditional concern with metaphysics and its never-ending inquiry into essences and accidents. In subordinating ontology to metaphysics, ontology is always about the stuff of reality.

“But wait,” you say. “Isn’t that what ontology is,” you say. Well, it can be and it must be as a part of metaphysical inquiry. What I suggest instead is that we consider what it would mean for OOO to engaging in ontological inquiry stripped equally of epistemology and metaphysics. And, I’m in good company making this suggestion. From Bruno Latour’s Reassembling the Social,

To go form metaphysics to ontology is to raise again the question of what the real world is really like. As long as we remain in metaphysics, there is always the danger that deployment of the actors’ worlds will remain too easy because they could be taken as so many representations of what the world, in the singular is like. In which case we would have not have moved an inch and would be back at square one of social explanation—namely back to Kant’s idealism. (Latour 2005 p. 117)

So what would it mean to have an ontology without metaphsyics? A provisional answer, ironically, I locate etymologically: ontology from the Greek ὄντος, being. While much of ontological discourse, as traditionally subject to metaphysics, does focus on reality. There is a viable alternative in ontology as the study of being, or perhaps the preconditions of being. So the stuff of reality—metaphsyisics with all its endo-attributes and exo-accidents—comes later. While certainly this circumscribes the explanatory force of ontological inquiry to a much smaller arena, it saves OOO form the problems of access that still manifest in metaphysical inquiry. I would argue that this version of ontology resonances well with Mol’s multiple ontologies and Bogost’s tiny ontology. (Although, perhaps they would disagree.)