November is #AcWriMo! That’s Academic Writing Month, of course. A delightful re-branding of National Novel Writing Month (#NaNoWriMo), #AcWriMo is a smorgasbord of lofty goal-setting, binge writing, and engineered social accountability. I’m pretty good at #AcWriMo. In November 2015, I wrote about 10,000 words. In November 2017, it was over 17,000. And, in January 2018, I hosted my own personal #AcWriMo-type binge session, logging about 30,000 words. So, yeah, I’m totally bragging here, but let me take a moment to contextualize this braggadocio for what it is. I’m not claiming to be a great writer (or even a good writer.) Indeed, my prose has been publicly derided as “a clunky jargon-laden mess.” Hell, an Irish historian who I’ve never met, probably will never meet, and who publishes in entirely different circles once wrote to tell me that I’m personally responsible for the downfall of the English language. My brag here is simply that I’m a fast writer. And I’ve run into more than a few people over the years who’ve asked me how they too can become a fast writer. I don’t know if I’m really technically qualified to answer that question, but what I can tell you is what’s worked for me. So – as the title suggests – what follows is my brief guide to #AcWriMo binge writing.

Somewhere around 10/25, I will stop all writing until 11/1. I know that seems counter-intuitive when the whole goal is productivity. And, hey, if you’re on a roll, this is crazy advice, so don’t listen to it. But for me, if I want to get a lot of words out, I start by getting a lot of words in. I stop writing and start reading, a lot. To use a sports metaphor, it’s like fuel and hydration. I need a lot of words (different kinds of words) circulating in my brain, bouncing off one another, priming the pump. Only then will I be ready to prose-vomit all November long. My goal for the last week of October will be to read a book and six articles. I won’t succeed. This whole thing is about failure (see below). But, I’m going to go for it all the same.

#AcWriMo isn’t a marathon. It’s a quadrathlon, or at least some sort of n-athlon. For me, successful academic binge writing means having multiple unrelated writing events ready to go. Last November, I worked on 1) an article for a disciplinary journal, 2) a monograph chapter, 3) a conference presentation, and 4) a grant application. I don’t know about you, but if there’s one thing I can’t do, it’s sit down and write out an entire piece in one go. No way, no how. But what I can do is switch from genre to genre whenever I get bogged down. Book chapter not going well? Work on that grant. Running out of steam on that article? Tackle that conference presentation. (See also: structured procrastination.)

One of the easiest ways to get bogged down in binge-writing is to try and take all the hurdles. Just going to clean up the phraseology real quick. Oh, spelling errors- whoops. Better chase down that citation. I don’t want to lose it. All of these are critically important writing tasks, and they will all prevent you from putting words on a page. This is a great way to end #AcWriMo with one beautiful paragraph. If you want big numbers, you’ve got to Hulk-Smash your way through those hurdles and just keep going. Here is a real draft sentence from my binge sessions:

Three rotors independently aplied the schema to 1,457 units (which exceeds the minimum reliability threshold of 10,90 and approaches the maximum useful sample of 1,459; see that fucking IRR article Sang-Yeon gave me) in order to assess inter-rater reliability.

Write sentence after sentence, just like this. Do not go back to fix mistakes. Do not look up citations. Just get enough down on the page so that when it’s time to edit (IN DECEMBER), you know what you meant. (100% success not guaranteed.)

Eye on the Prize:

Despite lots of internet advice to the contrary, I think it’s important to set unattainable goals. If I aim for 5,000 words this #AcWriMo, and I succeed at writing 5,000 words, I haven’t done near as good a job as if I shoot for 20,000 and write 15,000. For me, one of the key ways to make this a successful failure is tracking. Each #AcWriMo or #AcWriMo-style event, I create a spreadsheet to log my progress. At the end of each writing session, I note how many words I wrote, on what project, and the spreadsheet auto-calculates my total. I’m always only two clicks away from seeing exactly how hard I’m failing, and that keeps me motivated.

The other harder part is to put everyone else’s eye on your prize. Nothing like a little public accountability to keep you going. But, still, I recommend claiming loudly and proudly how many thousand words you’ll write. Then, keep the world updated. Let them know how far off your goal you are. Cheers and jeers alike keep me going. They let me know I’m part of a community of people slogging through this thing together. Engineered accountability. It exposes you. It can be hard. But it helps. 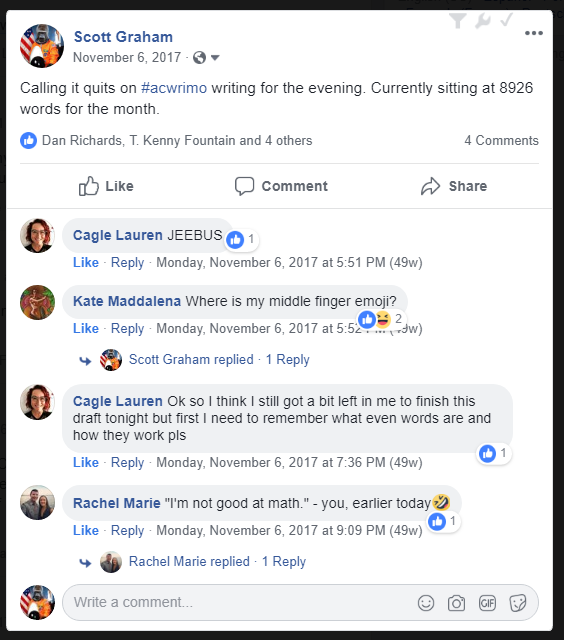 Who wants to fail with me?