This entry is what I hope will be the first in a series of Object-Oriented Quibbles (OOQ, for fun. I like the playfulness of the Q-tail. It’s a nice visual metaphor for this project—a cock-eyed reappraisal of OOO.) If you follow my work at all, you will know that I am a big fan of new materialisms (Coole and Frost’s term). Even before I knew very much about new materialisms, my work was heavily invested in questions of ontology (see here and here, for example). And, of course, more recently I (with Carl Herndl) have argued very strongly for a rhetorical embrace of the new material (here).

My goal in this (hopefully series of) post(s), is to slow down and give myself time to think carefully through the arguments of OOO and their ramifications for rhetorical theory. It’s also a way of for me to publically express some of the concerns that arise for me as I work through this new(er) theoretical agenda. I sincerely hope that my readers (and maybe even the authors of the works I address) will not hesitate to engage with my critique for the benefit of both parties. The last exigency for this series arises from the richness of OOO. There’s so much going on in the new materialist turn that I cannot possibly write about it all for publication. Thus these OOQs are in many respects just that, quibbles; musings and issues that don’t necessarily rise to the level of demanding a full scholarly retort. In any event, onto Q1: The Cult of the Z-Axis. 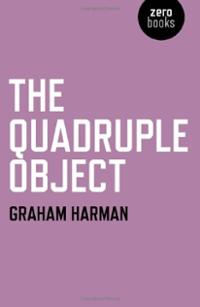 My primary focus in this post comes from a few lines of Graham Harman’s The Quadruple Object (2009). In this book, Harman works to develop on ontological account of the object. In clarifying that this account is ontological, he rejects the traditional epistemological approach of philosophy (and about any other discipline) to the question of the object which reduces inquiry to the problem of epistemological access. In short, Harman argues (and I agree) that most of the history of philosophical inquiry into objects immediately recasts questions about the object and questions about the relationship between the (human) subject and the object. How do we know the object? Can we know the object? Etc. Etc.

My quibble has to do with “depth.” (Harman’s use thereof in a few paragraphs.) The notion of depth is a standard idiom in academic discourse. “My new awesome theory provides a deeper account of X than the old dusty theory.” Most of us are guilty of using this turn of phrase. I’m sure I have a time or six. So what’s the problem with depth? As anyone who slows down and takes a moment to think about the depth-idiom knows, depth is most often academic code for satisfaction. “I find that my proposed theory provides a more satisfying account of X” would often probably be a more honest way of putting it. This satisfaction might be a matter of aesthetics (the eloquence/elegance of the account), politics (corresponds with the author’s practical agenda), or any other kind of academic satisfaction.

My first argument then is that this idiomatic use of the word “depth” should the stricken from ontology. While generally speaking, in academic discourse, we are able to read the idiomatic use of depth, and it thus presents no substantive problem for our continued discourse, the notion of depth takes on a more central significance in ontological discourse. There may well be a there there that transcends academic satisfaction.

Indeed, in many cases, something much more serious is meant by depth. The notion of depth may mean very intentionally and specifically something that exists below or behind. Below or behind what? Well, I imagine if we were to trace the use of the word depth in academic jargon (that would be an interesting project!), we would find a consistent collocation of depth with the classical empirical model of scientific discovery as uncovering. If we were to find this to be the case, it would suggest very strongly that the academic notion of depth is a product of the very two-world hypothesis new materialisms reject. That is depth refers to an inner realty below or behind the perceptive surface of inquiring humans. That is, there is perception and reality and the truer true addresses the reality, the depth.

And indeed, this model of depth corresponds to Harman’s use of the term in his celebration of Heidegger’s tool-being,

But however popular it may currently be, the pragmatist reading of Heidegger misses the target. For the tool-analysis teaches us something much deeper than the emergence of conscious awareness from the prior unconscious use of things…. To oppose the arrogant pretentions of theory, the tool-analysis shows us that the being of an apple, hammer, dog, or star is not exhausted by its presence in consciousness. No sensual profile of these things will ever exhaust its full reality, which withdraws into the dusk of a shadowy underworld. (Harman p. 42, emphasis added)

Ultimately, I am concerned that this use of depth reenacts the two-worlds hypothesis that Harman works so hard to avoid. How can one possibly use the term depth as a euphemism for the reality which escapes sensual profile without begging the question of access? The very notion presupposes a sensual surface from which the true reality of the object can/must recede.

Fortunately, as the arguments unfold in The Quadruple Object, Harman distances himself from the model of depth articulated in Heidegger’s tool-being. In so doing, he (Harman) rejects the essentialization of the receding being of the zuhanden tool and recommends instead an ontological model of infinite regress.

But the problem remains that Heidegger allows for nothing deeper than the being of a thing. If we consider the hammer in its sequestered tool-being, we find it already at the bottom of the universe. We are thus left with nothing but a permanent play of light and shadow across a single gap between genuine being and derivative presence, and with human experience as the sole site of presence…. Hence it should now be clear that the hammer as a real tool-being is not located in the basement of the universe at all, since a layer of constituent pieces swarms beneath it, another layer beneath that one, and so forth. Instead of saying that this regress into constituent objects is indefinite, I would go so far as to call it infinite…. (Harman p. 112)

Beautiful! And I agree entirely. But then what of the notion of depth? If regression is infinite, does it make sense to talk about an ontological above and below. Certainly, then, all invocations of depth are relational and provisional. Object/Articulation A is only deeper in respect to Object/Articulation B insofar as B subsumes A. So one could indeed argue that an account of B is deeper than the account of A, but there can be no corresponding value judgment. Deeper is not better. In fact, in this model complexity may be better and as such a more “shallow” account that explores A’s interface with other objects at the same level may be…..more satisfying. Thus I’m not entirely sure what to do with Harman’s use of “deeper” in line one, above.

And, unfortunately, this notion of depth continues to make its appearance throughout The Quadruple Object. It can be found right up to the end in Harman’s ultimate account of reality.

An object is real when it forms an autonomous unit able to withstand certain changes in its pieces. This does not require additional relations with other entities, since we have seen that the real object lies deeper than such relations, and often enters them with no lasting effect to itself. (p. 123)

But again, if depth is relational and provisional, then I find this account of reality unsatisfying.