Pop quiz! Which journal in rhetorical studies published the most articles in rhetorics of science and medicine between 2005 and 2010? If you had asked me that question two days ago, I would’ve said: “I don’t know. Probably TCQ or RSQ.” Turns out I would have been half right and half wrong. (It’s TCQ, by the way, but RSQ is making a run for the title—more on that later.) So, as you can tell, I wanted a real answer to this question, and, as such, I spent the better part of four days pouring through every single article published in five flag ship journals in rhetorical studies to find out the answer. The data’s below, but first a few notes on methods.

What counts as rhetoric of science and medicine? That’s a very good question—without an easy answer. In order to tackle this assessment, I had to come up with some sort of rubric. I have no doubt—as is the case with any disciplinary gerrymandering—that my rubric will piss someone off. I’m sorry. It’s certainly not my goal to offend anyone by “erroneously” including or excluding them from my taxonomy.

So what about RSTEM—rhetorics of science technology, engineering, and mathematics? (It includes the added benefit of being politically appropriate given today’s higher education funding priorities.) Damn it! I still don’t have medicine in there. I also want social sciences and environmental rhetorics. And here we have now arrived at my absolutely absurd title: R(S)STE2M2….Rhetorics of (social) science, technology, engineering, the environment, mathematics, and medicine. I happen to like R(S)STE2M2 even though it’s slightly unreasonable. I’ll probably stick with RSTEM for the time being. Just know that when I do, I intend S, E, and M polyphony.

I should mention that I have left one very important allied area of inquiry out of my schema—new media studies. The large umbrella of new media studies obviously overlaps in important was with rhetorics of technology. Indeed, when it comes to some studies, it’s hard to tell the difference. Because of this difficulty, I made the hard decision to leave all media out. This means I excluded not only studies of websites and YouTube from R(S)STE2M2, but also inquiries into the history of photography and the printing press. I’m not happy about this. I’m sure others might be incensed by it. (Again, I’m sorry.) I ultimately decided that since finding the line between rhetoric of technology and new media was an impossible task, that I would exclude it all.

Now that you know which types of articles, I was looking for, the question of which journals arises. I confined my study to five first rate journals in rhetorical studies—major journals from both the English and Speech/Communications traditions:

My goal was to find out the prevalence of rhetoric of science and medicine in the field. So I left out some obvious contenders like POROI and Health Communication. Great journals, but obviously, the percentage of R(S)STE2M2 articles in likely to be quite high—too high to tell me anything about prevalence. (Note: “Articles” includes articles, introduction, review essays, and interviews, but not book reviews.)

Table 1: Total number of articles, number of R(S)STE2M2 articles, and percent by journal. 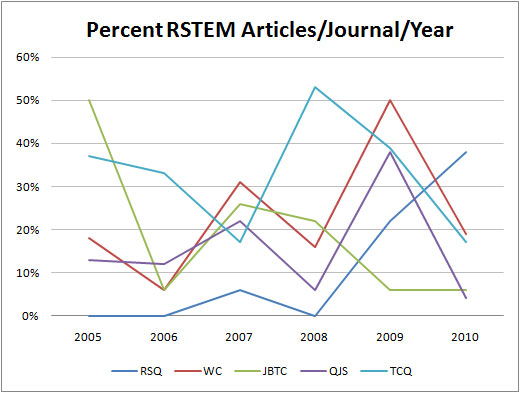 Figure 1: Number of R(S)STE2M2 articles per journal per year. (Isn’t it interesting how there are significant shifts which correspond to changes in editorship–specifically RSQ and JBTC?)

5 thoughts on “How big is Rhetoric of Science and Medicine?”