*Note: I write about books for a number of reasons. Most often, it’s to share my thoughts or to critique them. In this case, I’m writing as part of an effort to figure out what it (the book) meant. The following post is my attempt at working my way through the first part of an extremely dense and complex monograph. I make no claims to have gotten any of it “right.” 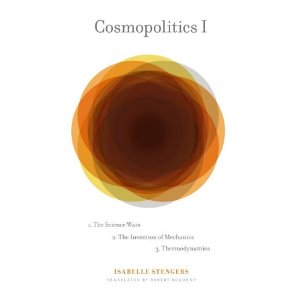 For the past week I’ve been reading book one of Cosmopolitics book one. No, that wasn’t a redundancy. Rather Isabelle Stengers, a Belgian philosopher of science, wrote seven books originally published in French. Those books are being rereleased in English in a two volume series Cosmopolitics I and II. I just came out, II next year.
So, I regret to admit that my recent foray into Cosmopolitics is my first encounter with Stengers. It seems I should’ve known her before. She’s published a couple of important books in philosophy of science and has notably coauthored with renown physicist Ilya Prigogine before releasing Cosmopolitics. I’ll have to go back and check them out when I have more time.

As I mentioned, Cosmopolitics is a seven book (in two volume) collection. In the preface, Stengers says they can be read in any order, though she recommends consecutively as they constitute a step-by-step argument. So, following her advice, I began at the beginning with Book I: The Science Wars. I’ll start off by saying that with a name like that, I was expecting something entirely different. While the themes addressed certainly mirrored many of the issues prominent in the famed Science Wars of the 1990s, there were no overt references to the Sokal Hoax or any of the surrounding events that typically trigger the use of the term “Science Wars” in Anglo-American discourse. (Of course, it’s not lost on me that Stengers is neither Anglo nor American.)

In any event, the bulk of Science Wars is devoted to introducing Stengers’ idea of an “ecology of practices” as the recommended mode of inquiry for philosophy of science. An ecology of practices studies the complex and dynamic relationships among various modes of practice in and around science. The ecological/relational metaphor comes with an attendant focus not so much on the internal regimes of justification—a focus common to much of philosophical/epistemological science studies—but rather a focus on the ways different practices present themselves to one another. In Science Wars, this focus is most thoroughly investigated through Stengers’ notion of “reciprocal capture.” Stengers defines this as a “symbiotic agreement” or a “dual process of identity construction” (p. 36) wherein conflicting practices develop a mutually beneficial relationship. Much of the discussion of this concept focuses on the production of worth, so I understand reciprocal capture as a means whereby different practices reinforce the (perceived) value of one another. (That last sentence was definitely me free-lancing. I’m not quite sure Stengers would put it that way.)
While the ecology of practices focuses on modes of presentation and justification among practices, it does not do so to the exclusion of issues within practices. Borrowing Latour’s notion of a “factish,” Stengers calls on philosopher of science to interrogate science under the rubric of becoming through focusing on the processes of (arte)fact creation. For Stengers’ the creation of factishes is grounded in the management of practical and ontological constraints which she dubs obligation and requirement. These constraints seem very different from the ideological or genre constraints commonly studied by rhetoricians of science. At this point I’m going to attempt to sum up what Stengers means by constraints, but I’d be lying if I implied that I understood the concept entirely. Stengers is working with very complex ideas and elucidating tremendously subtle varioations. Nevertheless, I’ll attempt it:

Clear as mud? I’m very intrigued by these ideas and I hope I’ll understand them better as I progress through the text. In addition to ecologies of practices and constraints Stengers deploys a number of other important concepts of particular interest to rhetoricians. I’m not going to go into them in too much detail here, because there’s a bigger issue at stake (about which more in a second). But, he work make liberal use of Derrida’s reinterpretation of Plato’s pharmakon which introduces an important level of discursivity into Stengers’ work. Additionally, she offers us a truly fascinating concept—which I have yet to totally make sense of: the “nonrelativist sophist.” In fact, Stengers argues for a nonrelativist sophist as identity for philosophical inquirers. I hope to find out more about this one soon.
And now one last issue for this post. I was very excited at the outset when exploring this notion of an ecology of practices. It seemed another excellent metaphor with which I could elaborate my sense of technoscience. However, Stengers argues for precisely the opposite:

“That is why the term “technoscience” does not reflect the interweaving of scientific and techno-industrial development but announces the radicalization of a critical position that the distinction between a “disinterested science” and a “dominating technology” can no longer science. Here, I am attempting the opposite.” (p. 76)

In fact, Science Wars is beset with argumentative attempts to recouperate binaries. Despite the ecological metaphor, Stengers views the various practices of science and technology as distinctly different from one another—and not just different, but also having different levels of worth. “not all are created equal” is a recurrent refrain in the book. At various places, she distinguishes between:

And these distinctions appear to be qualitative. At first, I just wanted to accuse her of being a back-sliding modernist, but that would be unfair. While, I am certainly yet to be convinced, Stengers’ arguments are thoughtful and compelling. Furthermore, her arguments are definitely not mere restatements of the modernist case. Rather, her treatment of these binaries is a reinterpretation of them—in light of postmodernity.

1 thought on “Cosmopolitics I-1”